This year we had 7 boats and 23 anglers taking part in this contest sponsored by Burnsco, Rebel Sports, Wild Gear and Darlin Imports. Believe it or not but for once the weather and sea conditions were quite nice for the time of year; day 2 was a little gnarly but still fishable and with the biggest catch tally.

On day 1 the anglers and skippers managed to land 5 kingfish and 4 snapper, and release 2 kingfish after a measure on our boards, and a photograph. The Ali-G team were the busiest crew with 3 kingfish to their name, with Hamish Sheard landing the heaviest fish of the day at 17.92kg on 6kg line. This fish came from 20m deep at the Cavalli Islands, using a koheru bait. Ali-G skipper Alastair Sheard also landed a nice kingfish of 15kg, and Sam Machell on Scrawny had a kingfish of 15.98kg, as did Campbell Druce on KC, with a kingfish of 15.44kg, all caught at the Cavallis with a live koheru bait.

Day 2 saw 7 kingfish and 1 snapper landed, and 4 kingfish photographed and released. Two keen junior anglers had joined the contest and they weighed in 4 nice kingfish. Thirteen-year-old Clay Blakeman on Miss Loo caught the heaviest fish for the day, weighing 14.22kg and another kingfish of 11.42kg, and his 12-year-old team mate Charlie Rowe weighed in kingfish of 12.8kg and 8.5kg. Aidan Lang on Fahout brought in the snapper which was a nice 6.62kg specimen.

Day 3 was quieter than the rest, with a few teams opting to stay out of the water, but we still had 3 kingfish and 2 snapper landed, and 1 kingfish released. The heaviest fish of the day was caught by Sam on Scrawny, weighing 20.44kg, a new pinfish for the season.

Although the Scrawny team had the biggest fish, which team had the most points??? Of course, it was the legendary team on KC – John Smith, Dave Chambers and Campbell Druce, who had been busy over the three days catching 10 kingfish to win the coveted Diomedea Cup and don their gold medals. Dave Chambers caught 6 of those fish, to win the Challenge Cup No.1. The Reo Cup for the junior angler with the most kingfish points went to Clay, and Sam still won himself a trophy; the Kingfish Lodge Trophy for the heaviest kingfish. Aidan’s big snapper won him the Challenge Cup No.2 for the heaviest gamefish of the contest besides kingfish, and the winners were rewarded with vouchers to be spent at Burnsco or Rebel Sports.

The contest went well and was enjoyed by all, and thanks go to all of our sponsors and the people who made it happen. 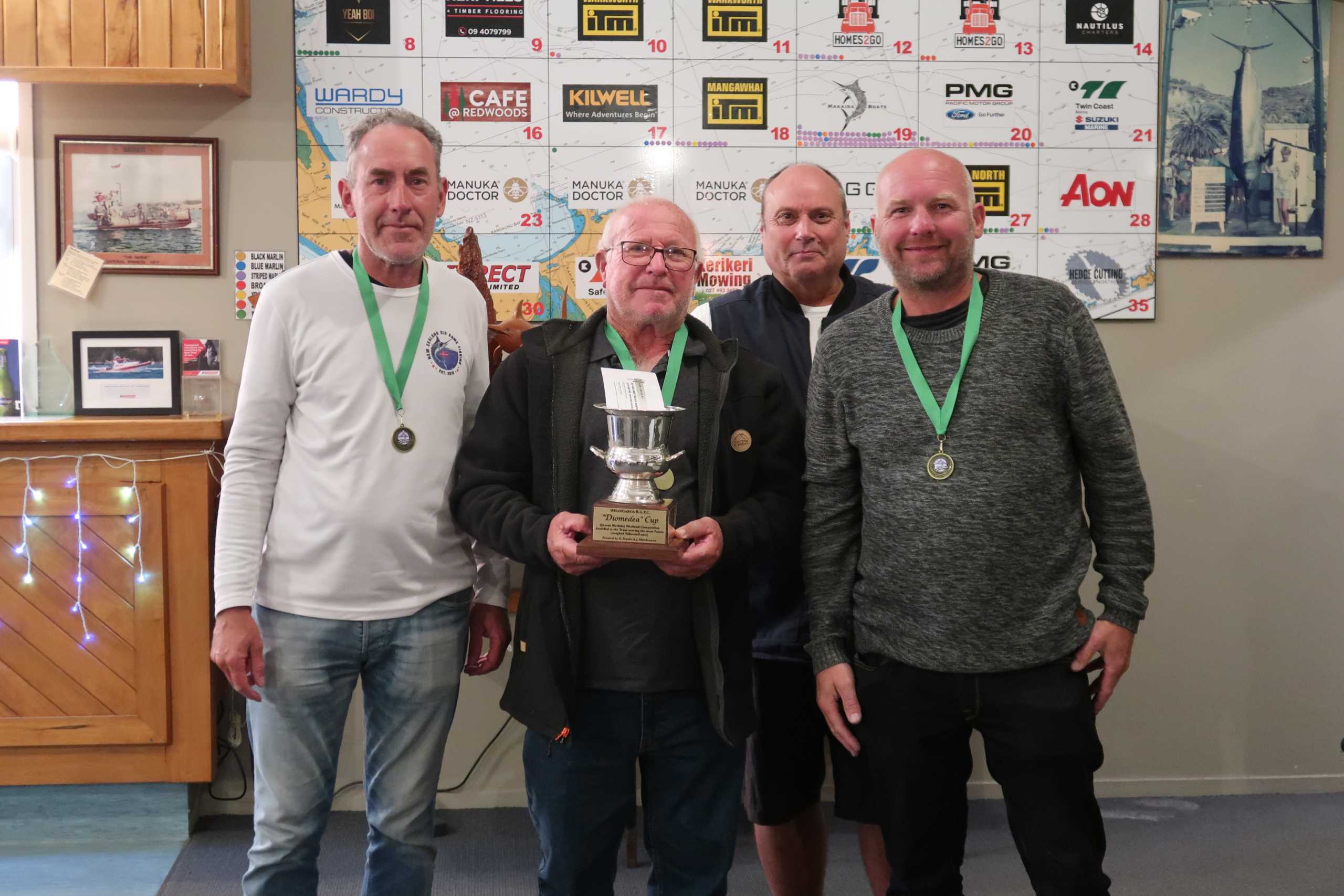