The weather here has been and still was, hot and dry, and calm, with gentle sea conditions, spoiling the children and their elders with very safe and comfortable conditions by and on the water, for our contest this year. There were lots of families around; locals and holiday-makers, milling around the club rooms and on the water in the inner harbour area and beyond, probably due to extra domestic travel with the inability to easily travel abroad, with the virus still out of control beyond our borders. We were all out to have a good time in our holidays, and we had a lots of children take part in our very informal fishing contest, with 22 0-6 year olds, 29 7-10 year olds, and 21 11-13 year olds, and a roughly even split between girls and boys for the two younger categories, then boys dominating the oldest age range.

In the 0-6-year-old category we had lots of sprats and spottys caught, some snapper and trevally, and some decent kahawai. Sami Orton landed the heaviest kahawai of 1.78kg, fishing with the Farmilo family on their boat ‘Latest Trick’. Sami also brought in the ‘heaviest other’ fish, a trevally of 1.77kg. Waimarie Rapatini had the heaviest snapper of 1.045kg and Kaewa McLean caught the heaviest sprat of 0.265kg. Waimarie also caught the heaviest spotty of 0.265kg which was so much bigger than the others it was an orangy colour beneath its spots, instead of the normal grey.

The 7-10-year olds landed some bigger fish, with Neeva Drury who fishes with her brother Caleb, and dad Chris, on ‘Pania’, catching a snapper of 2.62kg. Koby Farmilo on ‘Latest Trick’ landed the heaviest trevally of 2.18kg, and Blake Fergus from Whangaroa, who was out on ‘Go Hungry’, caught a very nice kahawai of 1.985kg. In the ‘heaviest other’ category we saw terakihi, granddaddies and a lovely parrot fish of 1.375kg which won Caleb McAulay first place.

The oldest kids took another step up in the size of their fish with the heaviest fish of the contest being a yellowtail kingfish of 13.86kg, caught by Jayden Booth on ‘Rip Off’ at the Cavalli Islands, taking 15 minutes on 10kg line to land it. The heaviest snapper weighed 3.8kg and was caught by Cooper Somers, and Luca Farmilo bagged the heaviest trevally at 1.89kg and the heaviest kahawai with a whopping 2.29kg fish. A parrot fish again took out the ‘heaviest other’ category, with a fish of 1.345kg caught by Cooper.

At prize-giving we let the youngest anglers pick their prizes, which they were delighted with, and the older ones were given lots of tackleboxes and rods, and fishing gear, which they were also pleased with, and if some of them hadn’t won a prize we did some lucky draws for prizes that were not won, and if someone still hadn’t got anything we handed out bubbles, lollies and water pistols. Children and adults alike all left very happy, perhaps some were tired after their long day, and made their way back home for well-earned naps, dinner and bed – and that was the adults! 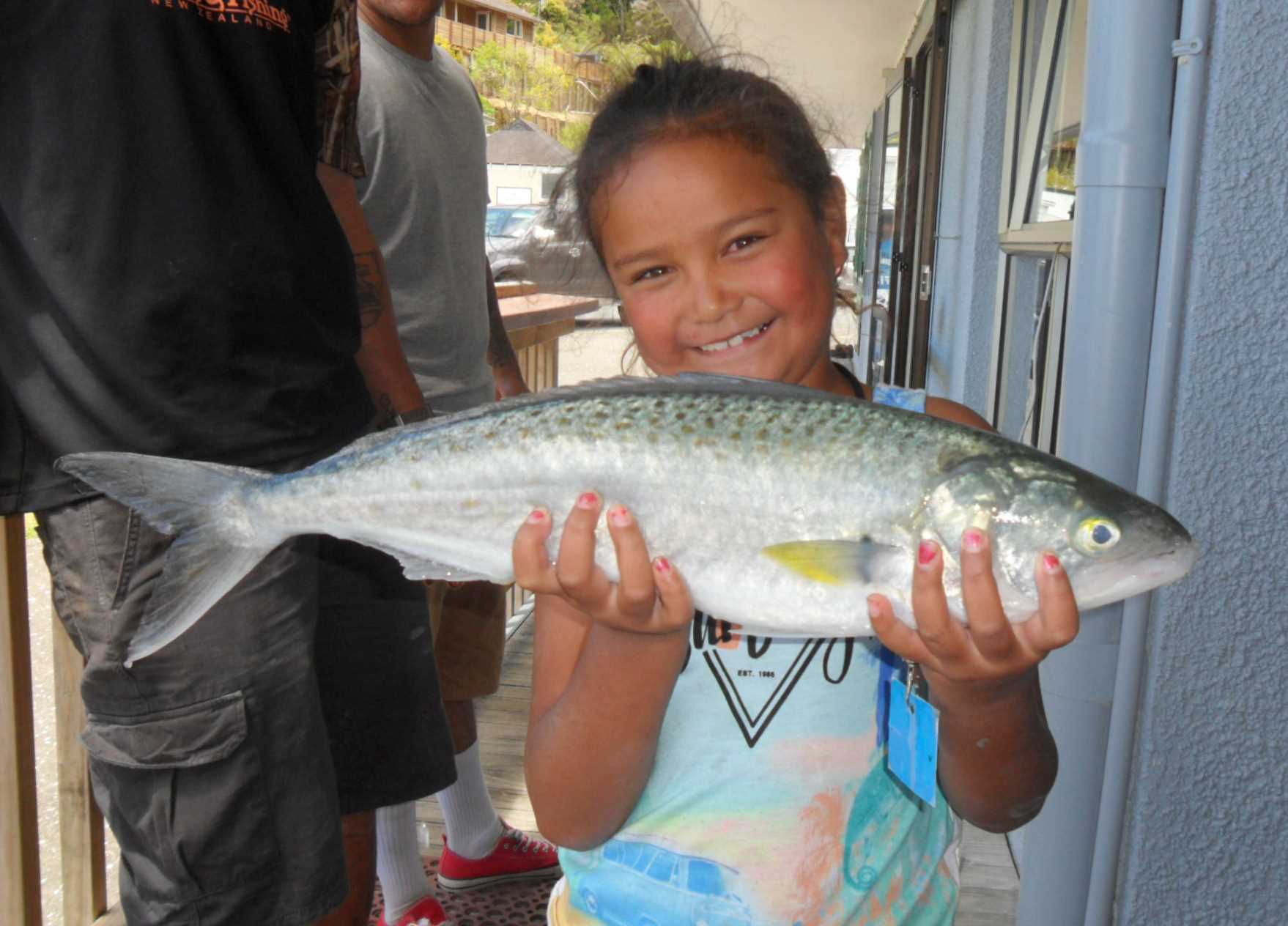