The weather and sea had been under a big high-pressure system for weeks now so the conditions were very good this year; hot, dry, sunny and calm. With a bit of respite from Covid as well, we had a good turn-out of 30 anglers and 14 boats take part.

We had some great sponsorship as well from Burnsco, Trish in the Sport Fish Café, Tony & Kerri-Rae at Hedge-Cutting Services Northland, Whangaroa Marina, Hooker Lures, Twin Coast, Blair from Safety at Sea, Scott at Nautilus Charters, and Tim Moselen from Bay Blasting.

First day was the best for the weather and sea conditions and the marlin fishing had been hot lately so most anglers went out looking for a marlin, and 11-year-old Aiden Gerrard, out on Catch 22 tagged and released a stripy estimated at 70kg from the Clayworks, then Lucy Cotter on Macksom also tagged and released a stripy of about 70kg, in Whangaroa Bay. Two other tags for the day were on blue shark on 8kg line, by Keelan and Anaya Morris on Reel a Peel. The best snapper of the contest also turned up, caught by Toby Patterson on 8kg line, a fish of 5.06kg.

Second day was a bit lumpier out a sea, a sloppy day! Nonetheless there were plenty of kahawai and snapper to weigh on the evening. Toby Fowler on Can Do, came in with a lovely kahawai of 2.4kg, the pinfish to beat so far. Eva Candy also caught her first kingfish which weighed in at 7.12kg. Brother Marlin Candy also had fishing action, tagging and releasing a stripy estimated at 85kg from 420m off the Cavalli Islands.

At prize-giving we had some lucky draws, but most prizes were won. The tag and release anglers all had good prizes instead of lucky drawing one winner from among them, and they were very happy. Eva won the Whangamel Perpetual Trophy for the heaviest gamefish of the contest, with her kingfish. All of our prizes were much appreciated but a huge catch was made by Luca Farmilo who won the major lucky angler draw of a fishing kayak given by Tim of Bay Blasting. It was a fitting prize for this very keen young angler. 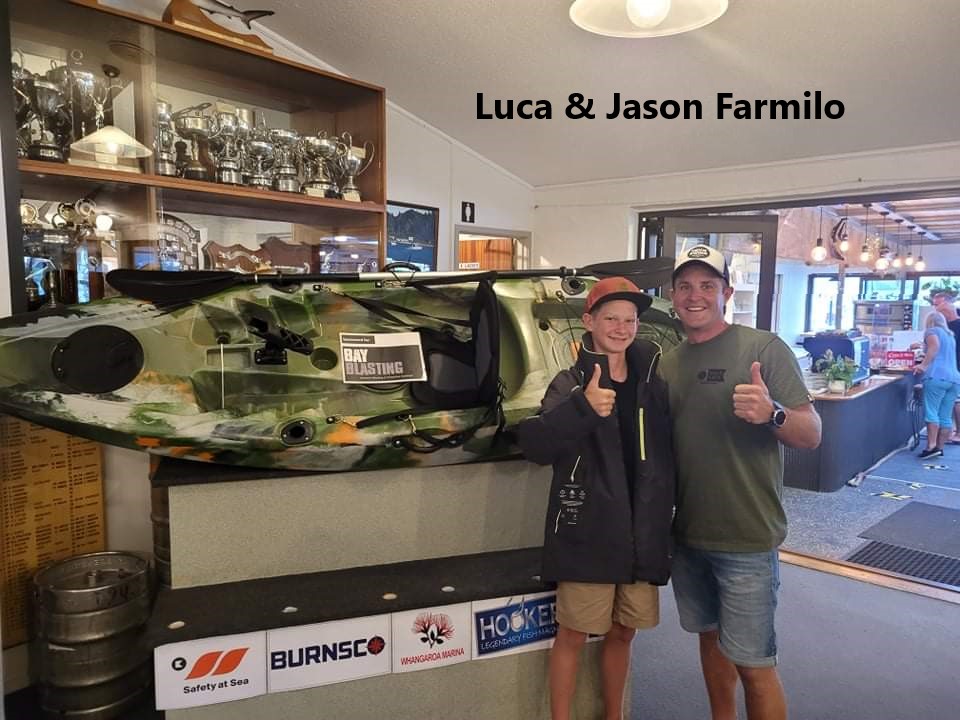