This year there was plenty of discussion as to whether the contest would be postponed or carry on, as a huge low pressure weather system hung off our east coast with predictions of terrible weather and sea conditions; big swells and wind speeds, and heavy rain – but we always have a harbour, so the contest went ahead, with the first day promising to be the best, so our contest seemed to get condensed all into one day, and what a super day that was.

We only had 7 boats but they all put to sea and had a go, and we had a fantastic first day tally of 27 kingfish and a lonely snapper, the best we have had for day one, in a long time. The bite time lasted all day and ace team Dave and John on KC managed to catch 9 fish; some landed and some measured, photographed and released. The heaviest fish was caught by John, with a kingy of 14.88kg.

The Diomedea team of Dave and Jeanette, and Tonya McKay and Jeff Whyte from the Bay of Islands Swordy had the next best tally of 6 kingys, with the heaviest of the team going to Tonya; a fish of 13.5kg on 6kg line. Lady Luck’s Dave Cobbald and Dave McAinsh managed 5 fish, with Dave Cobbald landing the heaviest fish of the comp., at 14.92kg. Sean Mackay and Marlin Candy on Senator, both managed 3 kingys each, with Marlin catching the only fish of the contest on 4kg line, which became a new junior boy’s club line record at 9.96kg.

The next two days were a real wash-out, with conditions getting worse except for a brief respite on the last day, but no more kingys were caught, but Dave Chambers managed 2 snapper, and Marlin tried for a kahawai prize, but his fish wasn’t quite heavy enough.

Dave Chambers won the Challenge Cup No.2 with a snapper of 6.58kg, Marlin won the Reo Cup with his points tally for kingfish, of 542 points. The Challenge Cup No.1 was won by Dave Chambers with his kingfish tally of 1243 points from 6 fish, and Dave Cobbald won the Kingfish Lodge Trophy for the heaviest kingfish, and the coveted Diomedea Cup went to the KC team with 1889 points from their 9 fish.

Huge thanks go to our contest sponsors Burnsco, who supplied all the prizes for us. 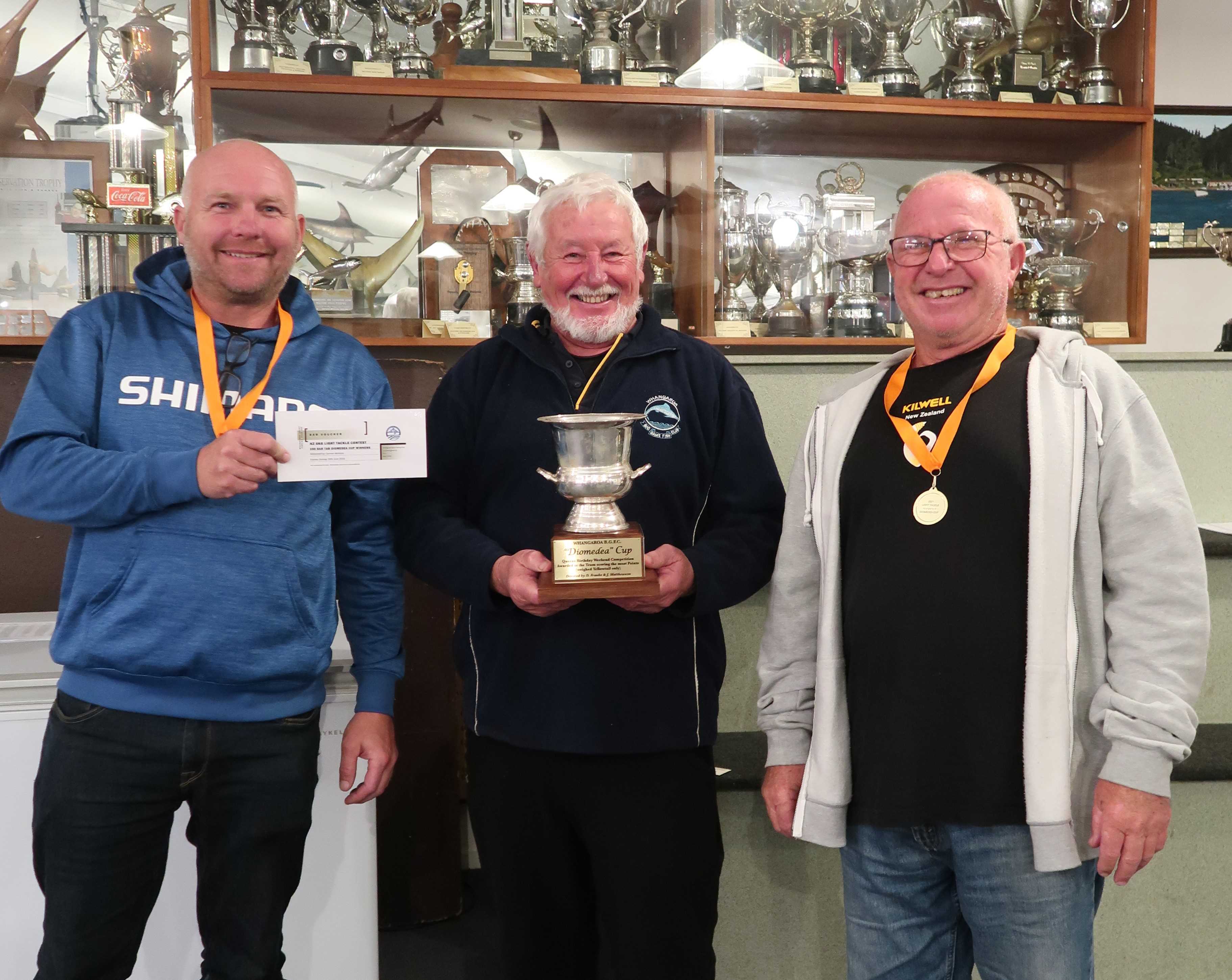