45th Annual One Base

This year we had a very different One Base, due of course, to Covid. We were in the red setting, so restricted to customers being seated, distanced, and no more than 100 in number, which kind of put the damper on things a bit, but we put our thinking caps on and held a One Base to suit the restrictions. It was not a return home to base each day like it usually is, it was continuous fishing from start to finish, daily prize-givings had limited categories and if something was lucky drawn, you did not have to be there! Registrations were mainly done online and there was no briefing or Calcutta on the Friday night. Instead, everyone was allowed to buy their own boat, when they paid to enter online, and the briefing was done over the radio on Saturday morning. All these changes were aimed at limiting the number of people in the club rooms at any one time, and it worked quite well.

This year was also the inaugural year of the Northern Sportfishing Interclub Series (NSIS) which was devised by the Bay of Islands Swordfish Club. Teams paid to enter the series, and could fish the Bay’s Eldorado contest, our One Base, and the Whangarei Deep Sea Angler’s One Base. Just to add spice to the contest, a large sum of money was put up for the winning club to use for repairs to their club rooms.

It seemed anglers and sponsors alike were very happy that a contest was taking place at all, so didn’t mind the changes. We had 38 boats and 126 anglers take part, which was very good considering the weather was none too nice, and an ex tropical cyclone was heading towards us!

Day 1 as always was sponsored by our fantastic sponsors Kilwell Sports who sent Tony Holden and Todd Geayley to come and fish as well, on Gutter Black, with their truck all newly painted up with very good artwork of several fish. Day 1 fishing conditions were jiggly but do-able and we did have a striped marlin on the weigh-station for Richard Jurisich on Rusty Hook, at an eye-watering on the dot, 90kg weight; a Calcutta fish! Ron Inkster on Violator and Richard Bratty on Macksom, also tagged one each. Tom Smart on Phantom brought a very respectable snapper of 8.7kg in as well, and Impulsive started their kingfish campaign.

Day 2 which was a Kilwell Sports day, was a wipe-out with gales blowing as cyclone Dovi gave us a near miss. A few boats ventured around the harbour or stayed tucked away, and we never had one fish for the contest, so every prize was lucky drawn, and we had added snapper and kingfish daily prizes as the game fishing was definitely off.

Day 3 was Lion Red and Iceytek day, and the weather and sea conditions settled out quite quickly, to allow some fishing to be had, and Mervyn Mitchell on Taylor Maid caught a marlin and let it go without a tag in it, but he and the crew were very happy still. Brigette Phillips on Katie Maree weighed in a nice skippy of 5.18kg and Keith Eastell on Rod Bender landed a yellowfin tuna of 35.4kg, the first yellowfin we had seen on the weigh-station for a while. The Impulsive team weighed in some kingis, with the heaviest of 7kg caught by Bryn Fowlie.

Day 4 was another Kilwell Sports day, and conditions were better again and it turned out to be a busy day on the water. Scott Wilson on Centrefold landed a blue marlin of 192.2kg which by all accounts was a very stubborn fish, taking about 3 hours to boat, and was set to be the heaviest of the contest, but not a Calcutta fish. Was somebody going to beat 90kg? Vincere had a go, with a stripy that they brought in, which didn’t quite go 90kg. Richard on Macksom and Sheldon Harsant on Phantom, both managed to tag a stripy as well. Astraea had been up north overnight and came back with a bevvy of snapper and some kingfish to weigh in. The heaviest snapper was 5.3kg caught by the skipper Mike du Toit, and Ethan Wilkinson had the heaviest kingfish of 14.58kg. Jeff Whyte on Diomedea landed a stripy but didn’t make the weigh-station in time, so it went into the last day’s tally.

Day 5 was Kilwell Sports day again, and there was a new Calcutta fish to beat, as Diomedea’s fish had weighed in at 104.4kg. But wait – Brodie Campbell on Violator caught a stripy and was bringing it in for weighing. Richard on Macksom tagged his 3rd stripy of the contest, Joshua Roscoe on Cerveza II fishing for Bay of Islands also tagged one, and we were delighted to hear that one of our sponsors, Todd, had tagged one as well. Grant Lunam on Takapu brought in a bigger skippy than Brigette’s, weighing 5.6kg, a new pinfish for the season, and Joe Foster on Albacora weighed in a lovely kingi of 16.2kg, and the Impulsive team racked up more kingfish points with weighed and tagged fish. Brodie’s fish was thought to be on the small side but it actually weighed 100.4kg, but didn’t quite knock Diomedea’s fish off the money.

Final prize-giving is all about the trophies, the money and the Waiataiti Trophy. Tom Smart’s snapper won the G&J Hawke Trophy, the Kauri Arms Tavern Trophy went to Keith for his yellowfin, and the Impulsive team just managed to beat Astraea in the tuna/kingfish section, to win the Whangaroa Club Trophy. Brigette’s skippy actually won her the Ladies Committee Trophy, and she wasn’t going to weigh it in. The points prize was a lovely gas BBQ which was won by Richard Bratty who had the most points from his tally of 3 tagged marlin. The Snooks & Lola Fuller Trophy was won by the Macksom team, who also won the marlin section’s Coruba Trophy. The Pacific Harbour Lodge Trophy for the heaviest marlin of the contest was won by Scott with his big blue, and Jeff on Diomedea won the Kilwell Classic Trophy and the Calcutta money for the heaviest stripy. Drum roll for the Waiataiti Trophy……. Hokianga were 2nd place, and Warkworth won it this year, with the catches from Centrefold and Violator.

This season I think that everyone appreciated that the contest went ahead, and we owe big thanks to our major sponsors who were Kilwell Sports, Lion Red and Iceytek. Thanks also go to our other sponsors who included Safety at Sea and My Hoody, and to our MC Kelvin Mowat, the committee and staff, bar and kitchen staff. 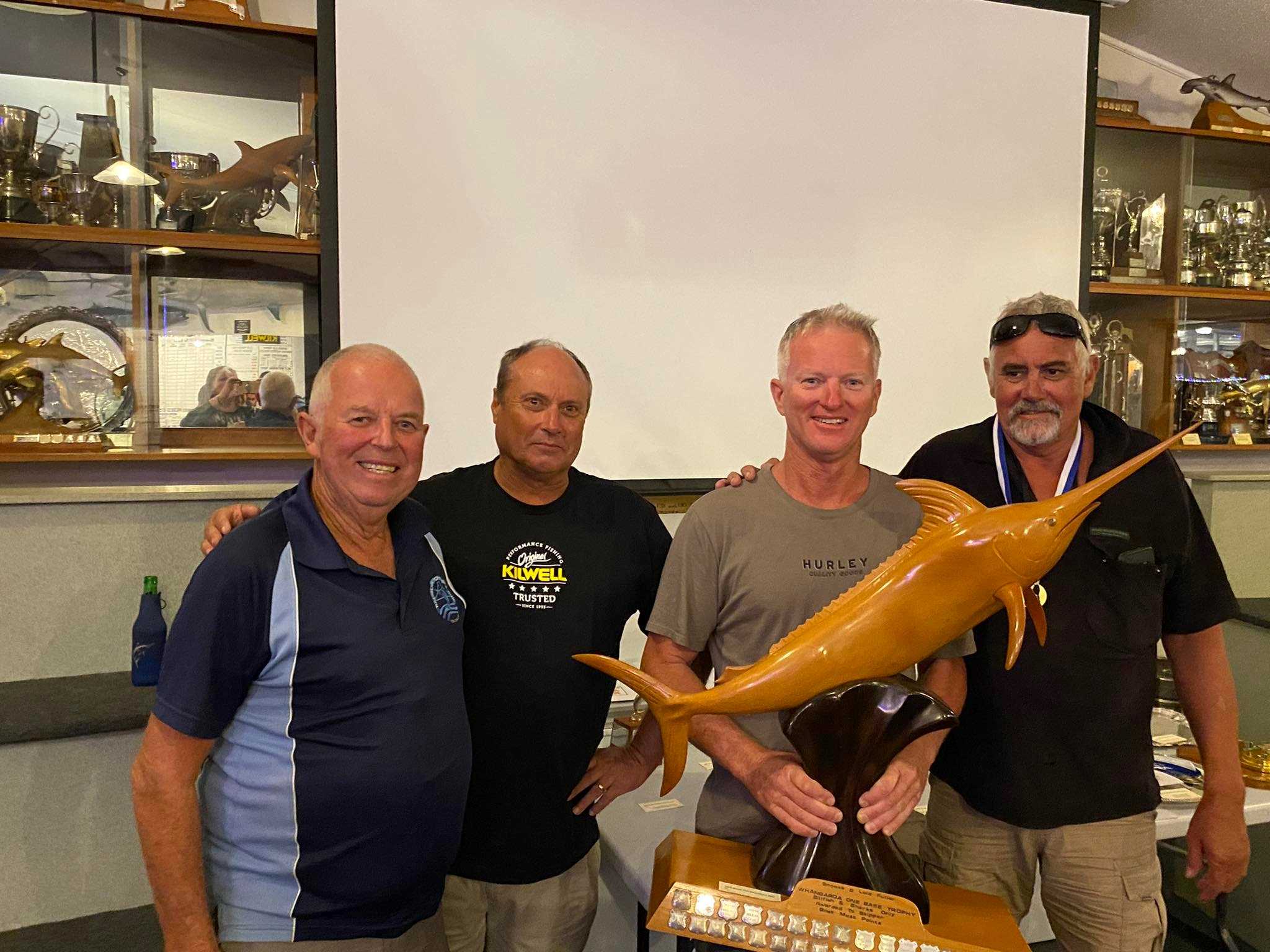